It's been 9 months since Cee left and 3 months since she retired and I still have yet to get full-time. I'm getting frustrated because it should have happened by now. I'm hoping they'll be good news after tonight's Town Board meeting, but we'll see. I've been doing the office manager work, for part-time pay and no benefits. Bryan got frustrated about this and ranted to my Department Head's significant other, with him sitting next to her. My boss finally had enough and told him he's doing his best to get me the position, which I knew, it's still frustrating.

Bryan and I have set a date for our wedding, October 17th 2015. Well, that was the plan and while it's still happening, we are going to get legally married this October 17th in a private ceremony. He's in need of insurance and since I should be getting benefits soon, we figure we might as well get him put on my insurance. I'm kind of mixed about it honestly. I feel like it will take away from the "big" wedding, but I am excited about it too.

So much has happened since my last update.

First, way back in January, Cee fell and broke her arm in two places. She has been out of work since. She ended up having to have surgery on it twice and at the earliest we were told she would be back is in June.

Today she called and told the Department Head that she's decided to put in paperwork for retirement. That means her fulltime position should officially be vacant in a few weeks and I'll be able to apply for the job. And since I've been doing her job (along with Em) since she got hurt in January, I think I have a pretty good shot ;) 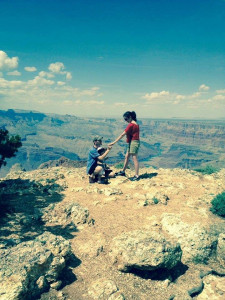 I just want one fricken happy Christmas for my daughter and my niece and nephews. I'm sick of all the fighting between my family.

I love Christmas, but I'm starting to wonder why. Every year there is a major fight and someone runs out crying. This has been going on for the last 20 years, so why do I still hold on to that hope that this year will be different?
Every time my sister comes home there is a major issue, whether it's during the holidays or not, and sometimes it doesn't even involve her. The first time my sister came up with my nephew my mom ended up throwing me into a wall for "laughing at her".

If both Bryan and I didn't have to work, I would say we should go visit his family during the holidays. His sister may have said some pretty nasty things about me in the past, but at least she makes an effort to get along. My family just snap at each other and my sister takes everything so personally, where the rest of us just bite our tongues. If this is how Christmas is going to be, Morgan will not be a part of the anger and fighting.

Last week I noticed that I was late for my period. I have been late before so I tried to put it in the back of my mind. But as days past I knew something was not right. Lauren and Matt were up visiting, so I tried not to think about it, but I couldn't get it out of my mind. When they left I spoke with Aimee and she calmed me down, I had been this late before and maybe I was wrong about when I had my last period. There was no way I could be pregnant...right?

When Sunday came and I still didn't get it, I finally got up the courage to purchase a pregnancy test. When Bryan came home from work I explained to him what was going on, but he too assured me that there was little chance I could be pregnant.

The next morning I took the pregnancy test. When I first looked at it I couldn't tell if it was positive, negative or simply inconclusive. I tried to not think about it when I was at work, but I couldn't get it out of my head, so on lunch I again went and bought a pregnancy test, but this time a digital one. When I got to work, I took it.

I was in shock. This was not supposed to happen. How would Bryan react? Afterall just this past week he had made several comments about getting fixed and how he never wants children. How will my parents react? This is just another thing to add to my list of ways I've disappointed them. Can we afford a child? I barely get by as it is.

When I got home, Bryan's friends arrived for a visit. It helped get it off of my mind for a bit, but I was still in shock. I decided to take another test to confirm. It too had that unbelievable word: Pregnant.

Bryan got home and after saying hello to everyone, I followed him into the bedroom. I laid on the bed and told him there was a problem. I said how I believed I was pregnant. He dropped his shirt and picked it up without a word. He finally asked how late I was and if I had taken a test. When I explained that by now I was nearly two weeks late and that I had taken 2 tests that confirmed it, he sat down next to me and told me we'd get through it and figure it out. I knew he would need to go out with his friends to vent, so he left and I was alone.

I spoke with Lauren and told her the news. She helped me out a lot and made me feel a lot better. When Bryan got back with his friends we spoke until almost 5AM. He was really supportive.

The next day I made an appointment to get it confirmed and to get set up with Medicaid. Bryan seems to not want to believe it until then.